Some natural systems known as Brownian ratchets use thermal fluctuations to extract mechanical power. In these systems, diffusion is biased in order to achieve unidirectional biological processes. Good examples are the molecular motors as kinesins or myosins that walk on the cytoskeleton and use ATP to bias their movement. Another case is the transport of mRNA between the nucleus and the cytoplasm through Nuclear Pore Complexes (NPC). The NPC is a large molecular complex which selects molecules that enter or exit the nucleus. It has been shown to be highly selective and directional.

To study the directional transport of biomolecules through the NPC, a simplified mimetic device based on nanoporous membranes was designed. Our approach used near-field microscopy technique, Zero Mode Waveguide for Nanopores. With this method single DNA molecules translocation through nanopores was observed in real time. Ratchet agents which are polycations that bind strongly to the DNA and cannot diffuse through the pore were added on the exit side of the membrane. We quantified the effect of the ratchet agent on the translocation frequency of DNA molecules. An experimental measurement of the free energy gain associated with the Brownian ratchet was extracted and compared with coarse grained modeling. 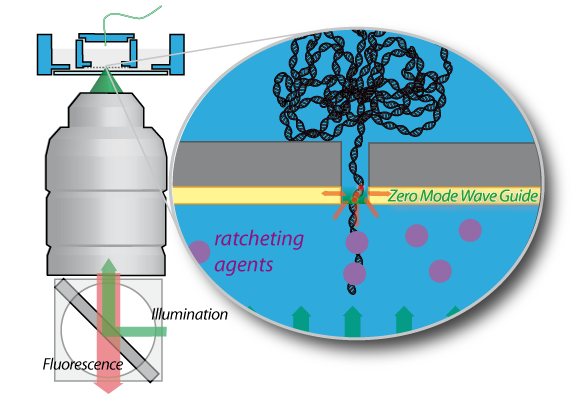