How to come to Orsay?

From the Paris-Charles de Gaulle airport

Take the RER B and get off at the Orsay-Ville station. All trains stop at all Paris stations and some trains are direct between the airport and Paris. Beyond Paris, each train follows its own route: not all trains serve Orsay-Ville.

From the Orly airport

Take the Orlyval automatic train to its terminus, the Antony station (caution: the Orlyval + RER B combined ticket must be bought before getting in the Orlyval; it will be stamped in Antony), then the RER B southbound (direction opposite to Paris) until the Orsay-Ville station. All the trains which stop at Antony go to the right direction: if the next train shows Massy as end-of-the-line you can either wait for a train heading towards Orsay or Saint Remy, or take this train until the Massy Palaiseau station (terminus) and then wait for a train stopping at Orsay-Ville.

Take the RER A to Châtelet les Halles (one station); alternative transportations are the metro lines 1 and 14. Change train at Châtelet and take the RER B line southbound to the Orsay-Ville station.

From the Massy TGV train station

Exit the station and walk a short distance to the Massy Palaiseau RER B station; then take the RER B train line southbound (opposite to Paris) until the Orsay-Ville station.

The single ticket from "Paris" to "Orsay-Ville" is 4,35 €. The price of the “Origin-Destination ticket” depends on your trip. You can buy them individually or by packs of 10 (you can save 20% if you buy a pack)
Information on https://www.transilien.com/en/page-editoriale/about-individual-tickets

How to get to IPN Orsay?

IPN is located in the Faculty of Science of University Paris-Sud, nearby the Orsay-Ville station on the RER B line (from Paris, direction either "Saint-Remy les Chevreuse" or "Orsay-Ville" direction).

At the station "Orsay-Ville", take the exit with the corridor under the rails on your left, then the first street on the left, rue Georges Clémenceau ; then go straight. The main entrance of IPN is in the building N°100 as indicated on the detailed map. The workshop will take place in the "Irène Joliot-Curie Auditorium" located one floor down if you take the main entrance. Using the alternative entrance from the parking (see map below), the auditorium is just on your left. 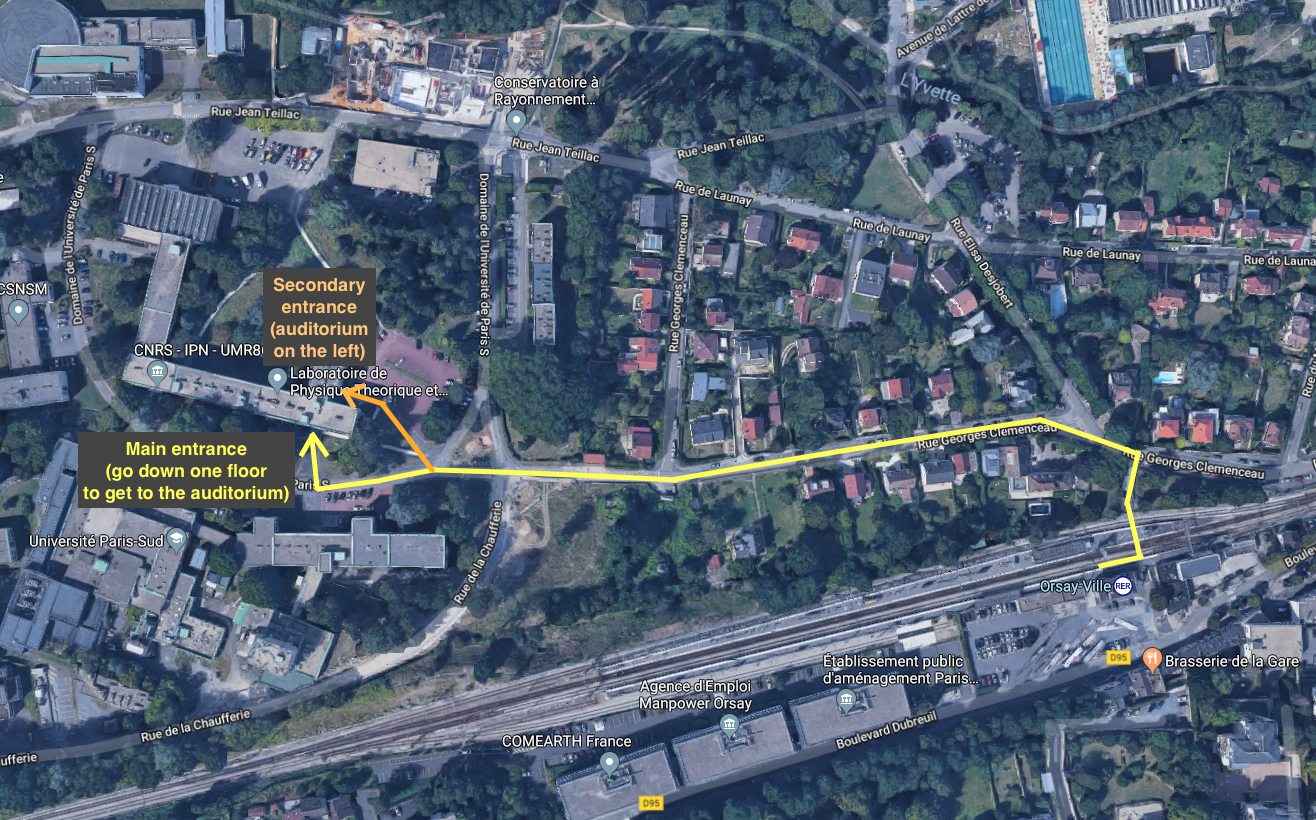