These lectures aim to cover in a hopefully thorough and systematic way what is probably the most alluring puzzle in flavour physics at present.

The theory part (4 hours) will deal with: SM systematics, including status of the relevant EFT expansion, form-factor cancellation, and bremsstrahlung; model-buinding efforts, including leptoquarks and extended gauge sectors; most challenging constraints from other measurements.

The experimental part (4 hours) will be an introduction to the corresponding measurements and their subtleties, including normalization channels, again bremsstrahlung, estimation of efficiencies, backgrounds, and a detailed look at the systematic uncertainties.

The GDR-Intensity lectures: from theory to experiment and everything in between.

This series of lectures, organized in the framework of the GDR-InF, is devoted to topics currently of considerable interest in the high-intensity frontier. Two experts, one theorist and one experimentalist, will dissect a given subject entirely on the blackboard, starting from the basics. The lectures are aimed at people in the early stages of their research career, in particular PhD students
and postdocs, but more senior researchers are more than welcome to attend. 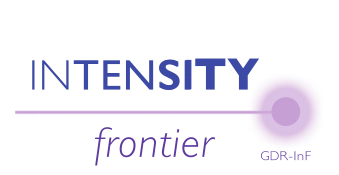